When we consider a chart of any female to establish whether she will lead a happily married life, then we have to go through different perspectives in i.e.
a) She will be enjoying the married life till her lifetime, or there will be a widowhood to give her a setback,
b) there will be some break up issue, resulting dissolving the marriage!
Many cases we find these days that marriage is a love marriage or inter-caste marriage where destiny has its own influence, but sometime we come across that inspite of Ashtakoot Milan there are cases that marriage did not succeed either death of a partner or divorce has played a mischief in their relationship!
Studies done on this with learned astrologers, and according to Shri. K. N. Rao it has been established that a Bhava Milan is relatively more important as compared to a regular study of only Ashtakoots Milaan. Bhava Milan is based on Mangal-dosha as per the mass role played by in the chart as per the Bhavas!
The best which works for a happy married life is the matching of basic promise and dashas ! If both charts have malifics in 6th 8th 12th and dasha is also adverse than there are consequently disturbances in marriage, divorce , separation or death is seen! We can have example horoscope of Sonia Gandhi and Menka Gandhi, as a study for seeing the evil effects of bhavas and Dashas ! First see the chart of Sonia Gandhi who was married to Mr. Rajiv Gandhi , she has a weak Sun and weak Saturn. Both have given her setback in her life on account of father and husband.

Menka’s horoscope has a prominent combination that suggests the possibility of widowhood. Mars is in eighth house from ascendant and Saturn with Rahu in eight house from moon. There is a very strong mangal dasha both from moon and ascendant. In view of classics which points on inauspiciousness of 8th house in establishing the manglaya of a female from 8th. 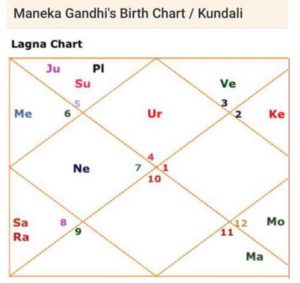 Therefore we have to see that if mars is placed in 4th , 7th ,8th or 12th without any influence from a benefic can make a woman widow! More than one malefic influence on 8th house can cut the marriage short!
To negate this result one has to check that if strong benefits of the partner in lagna or 8th house, 7th house is for manage , and if Saturn is placed in 7th , mars being in 8th ,or mars saturn in 4th house or saturn / jupiter in lagna the negative effects will be nullified !
When 7th house lord is retrograde and 8th is also afflicted by rahu ,mars ,sun or Saturn there are chances of separation , or the 7th house falls under paap katri yoga !
This is our wise selection of a learned astrologer to seek guidance to avoid the misfortune in marriage and relationship! shortcut methods and instant remedies have been seen resulting into disaster ! Destiny is supreme but ways to handle the destiny can be sought with proper research and going through proper methodology.